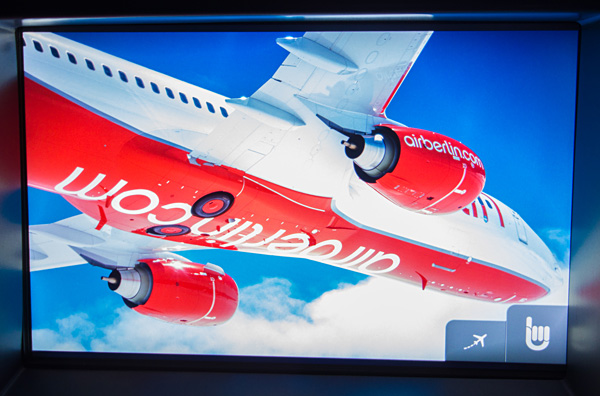 Pic: Air Berlin A330 new Business Class IFE Screen (Nov 2014)
Mid October, Air Berlin published a really cheap Business Class fare from Oslo, Norway to Jakarta, Indonesia. An opportunity I used to try their new Business Class and to visit Bali. The fare from OSL to CGK via TXL (Berlin) and AUH (Abu Dhabi) was $1018 (€818). For the positioning flight, I booked Lufthansa via Munich at €170. The first leg of the Air Berlin ticket wasn’t really exciting, as it was just a short-haul ‘all economy class’ flight from Oslo to Berlin. The layover at TXL airport was only 1 hour, so I didn’t visit the lounge. In fact, there wasn’t much time to do so, as I had to change terminals at TXL. An annoying experience as you arrive at the ‘temporary’ low-cost terminal C and need to walk outside to terminal A. Unfortunately, it might take another 5 years before the new Berlin Brandenburg Airport opens. Anyway, I was glad to board the Air Berlin A330!

Pic: Air Berlin Business Class Meal Service (Nov 2014)
The crew on the outbound flight AB7494 from Berlin to Abu Dhabi on Nov 7 was outstanding. However, I had the opposite experience on the inbound flight AB7495 from AUH to TXL on Nov 14. I’m used to this on Turkish Airlines flight, were crews are a hit or miss. Future Air Berlin flights will tell me if they have a similar thing going on. 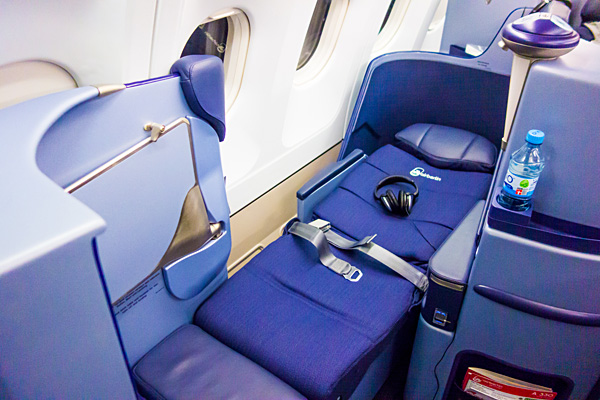 Pic: Air Berlin new Business Class – Full flat seat in bed mode
My Air Berlin flight arrived early in the morning at Abu Dhabi airport where I was lucky to shoot this awesome picture of Ferrari World from my seat window! 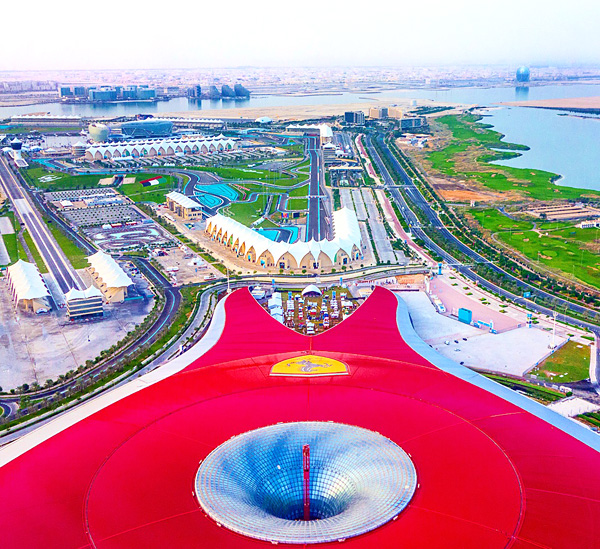 Pic: Ferrari World as seen from my flight upon landing in Abu Dhabi

Pic: Bart in front of the Etihad Towers in Abu Dhabi (Nov 2014)
As I hadn’t visited Abu Dhabi before, I opted for a long layover with 6:50am arrival on Saturday morning and 2:40am departure on Sunday morning. My rate at InterContinental Abu Dhabi was €116 which included 5000 bonus points and breakfast, a stay I needed for my Into the Nights challenge. I lucked out with the ‘family room’ rate, as it was much cheaper than regular rooms. Check-in at 8am was no issue, the front desk lady even apologized for not having a Deluxe Sea View room ready yet. Instead I was assigned a Deluxe City View room and granted access to the Club Lounge where I could enjoy drinks & food all day long! 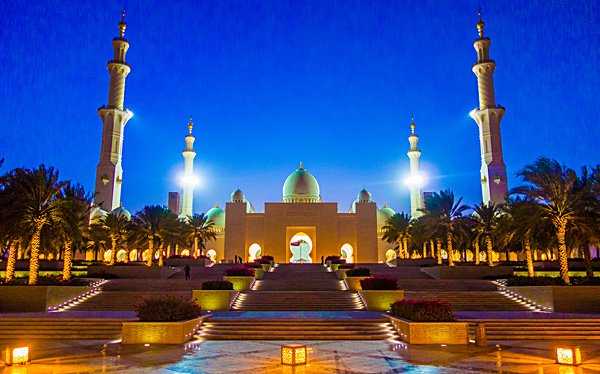 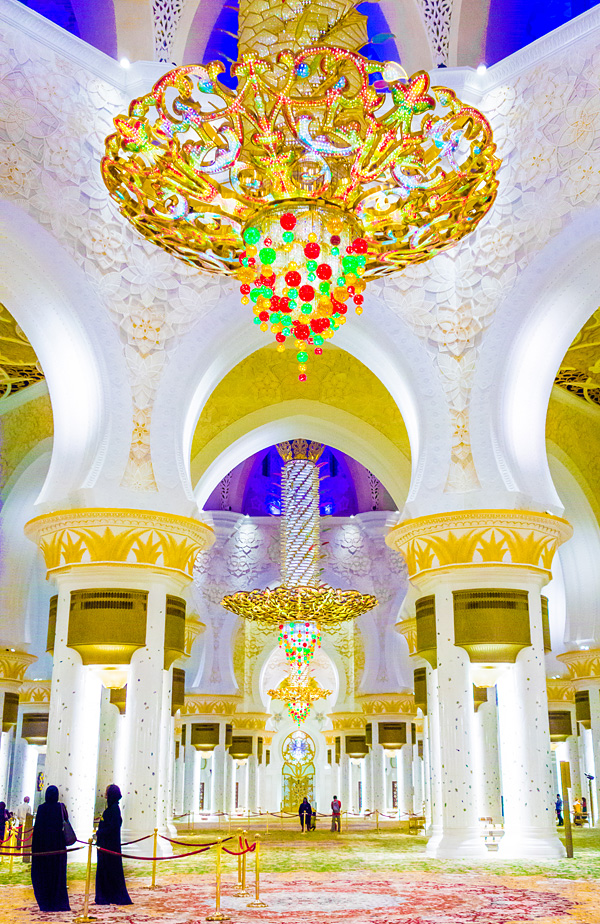 Pic: Etihad First Class Check-in: “Oh No! Another Travel Blogger”
After a long but rewarding day in Abu Dhabi, it was time to continue my journey to Indonesia. The final outbound leg, Abu Dhabi to Jakarta, was operated by Air Berlin’s partner Etihad. I had flown Etihad Business Class back in 2012, so I knew I could expect great service. The Etihad Business Class check-in counters were quite busy at Abu Dhabi airport, but before I had a chance to queue, I was ushered to First Class where I could complete my check-in… seated! 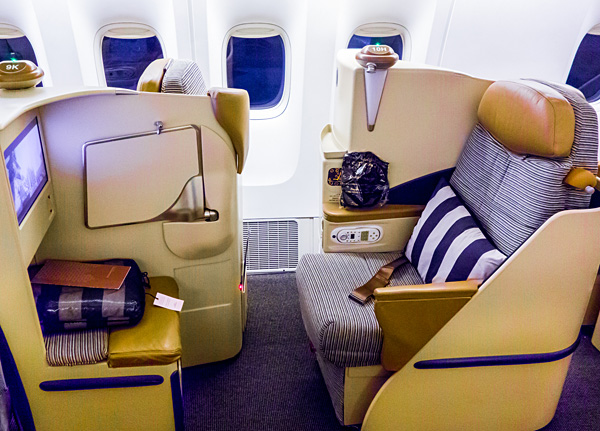 Pic: Etihad Business Class Amenity Kit (Nov 2014)
With take-off in the middle of the night (2.40am), I fell asleep as soon we reached cruising altitude. I did wake-up along the way to have a steak sandwich, but it wasn’t as tasty as on my first Etihad Business Class flight back in 2012. 🙂 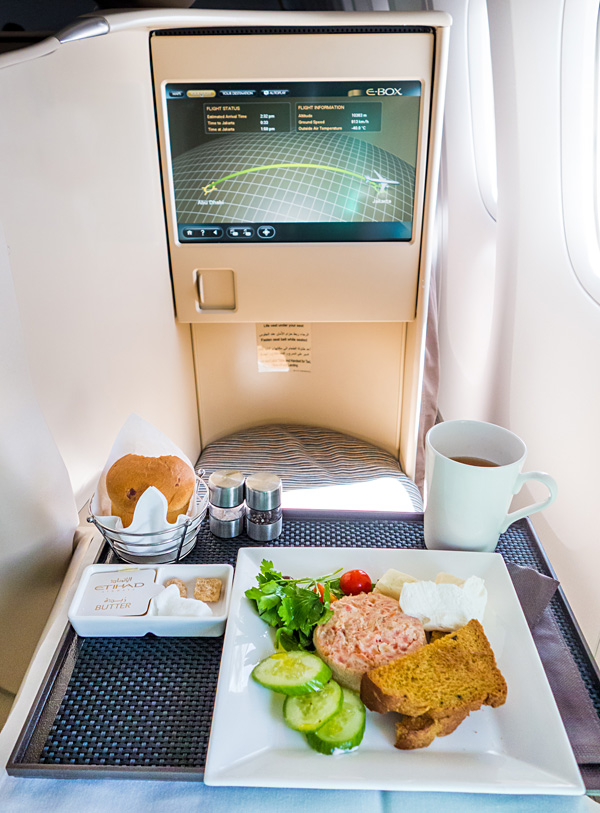 Pic: Etihad Business Class Breakfast – Arabic Omelette (Nov 2014)
After some muesli and fresh fruits, I had the Arabic Style Egg White and Tomato Frittata with Halloumi Labneh and Olives for breakfast. Delicious! Overall a great flight with excellent Etihad service as we are used to from Middle Eastern airlines.

At Jakarta airport (CGK), I continued my trip on a separate AirAsia ticket to Denpasar, Bali which included Air Asia’s highly recommended Red Carpet service. I used it twice now, once at Kuala Lumpur airport and this time in Jakarta. Actually, it resembles Lufthansa’s First Class ground services… but obviously a less fancy version of it! Red Carpet comes with dedicated check-in counter, personal assistant guiding you through immigration and security, lounge access and….they actually drive you over the tarmac to the plane in a separate AirAsia Red Carpet shuttle! In fact, they had a full busload of passengers waiting for minutes next to the plane, just to make sure I could board the plane first! All this for less than €12 ($15)!!! I really hope AirAsia will keep offering this service as it doesn’t seem to be too popular. It rocks!

Pic: Etihad Business Class Boarding Passes – Jakarta to Oslo
And of course, there was more of the same great flying on the way back from Indonesia to Norway. With a long layover between my AirAsia flight from Denpasar and the connection to Abu Dhabi, I had to figure out a way to bridge the time gap between my arrival at CGK and check-in opening for AUH at Jakarta Soekarno–Hatta International Airport. Fortunately, I spotted the Taman Sari Royal Heritage Spa at the end of Terminal 2F. The interior was tired and dated, treatments were really expensive, but at least the massage was good and I had the opportunity to take a shower afterwards. 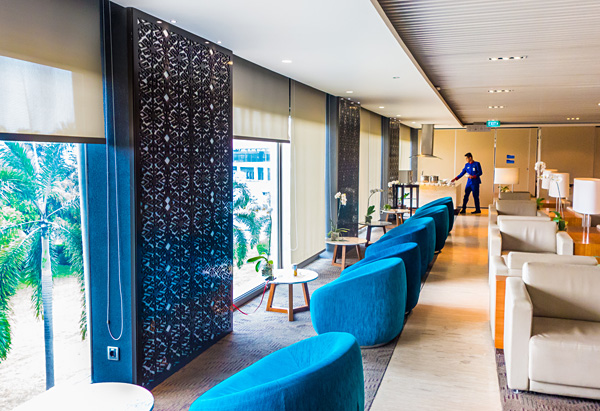 Pic: Garuda Indonesia Executive Lounge at Jakarta CGK Airport
Contrary to the outdate Spa before check-in, I found a refreshing Garuda Executive Lounge airside. As Etihad Airways Business Class passenger, you got a voucher at check-in which is valid for a number of lounges at CGK. The Garuda lounge looked the best pick.

Pic: Etihad A330 Business Class Seat 7A (Nov 2014)
The outbound Etihad flight was on a Boeing 777-300ER as where the inbound was on an Airbus A330 which had a more recent version of the Etihad Business Class seats with bigger Inflight Entertainment screens and more advanced remote controls. 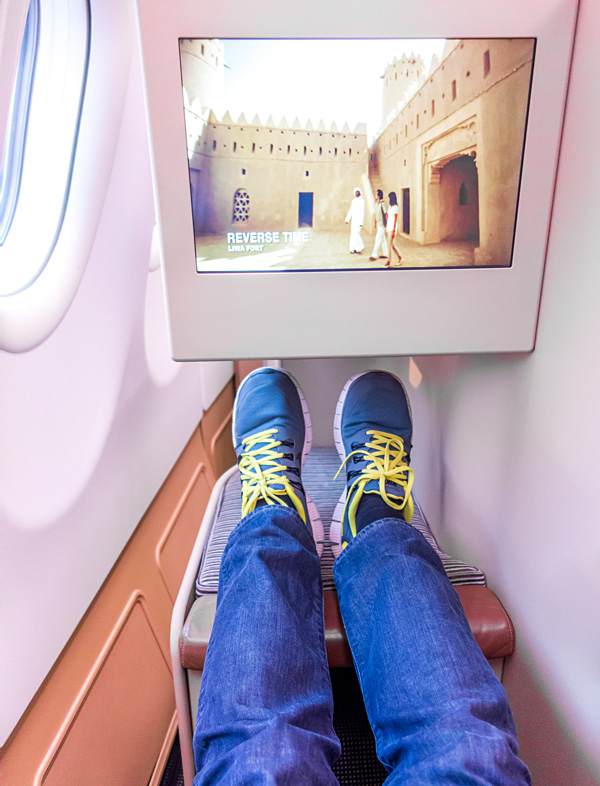 Pic: Plenty of leg room in Etihad Business Class on the A330 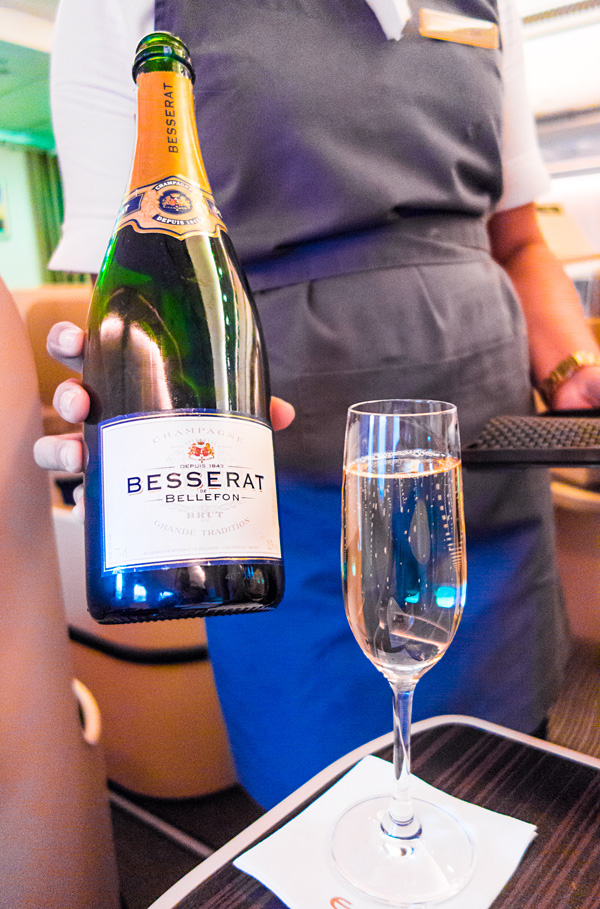 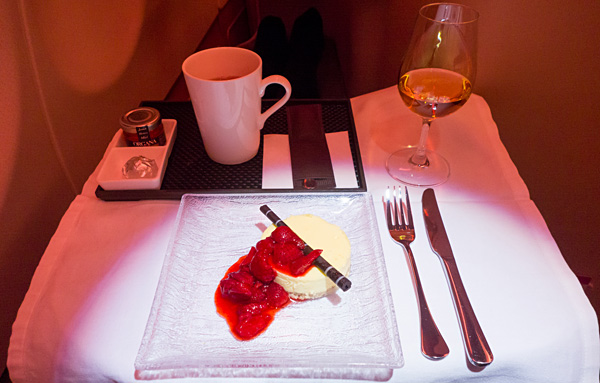 Pic: Etihad Dessert – Orange and White Chocolate Cheesecake
The Food service was excellent and so was the Etihad crew!

Pic: The Etihad Airways logo at the Abu Dhabi Lounge (Nov 2014)
In Abu Dhabi, I had to change terminals to take my connecting Air Berlin flight at Terminal 1. Yup, massages and showers are also available at the Etihad Six Senses Spa in Terminal 1! 🙂 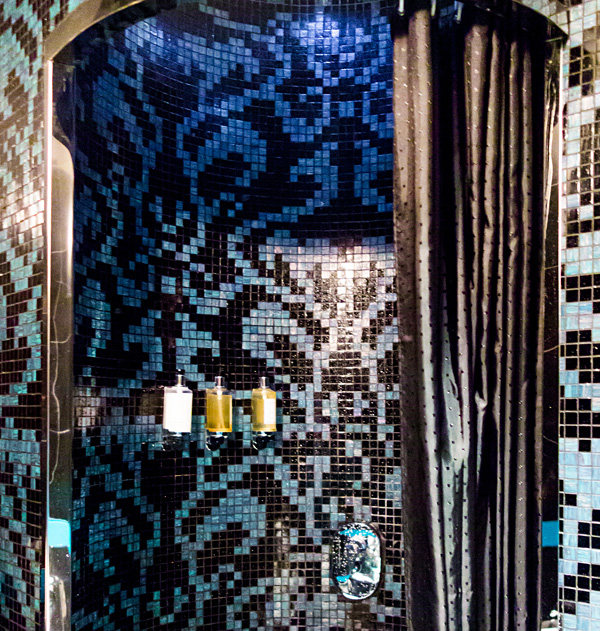 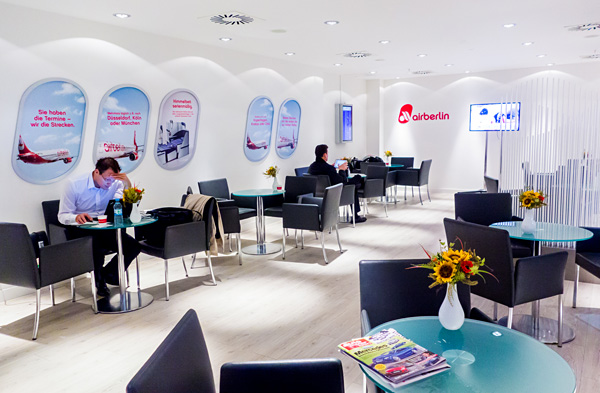 Pic: Bart freezing his *ss off at the Oslo Opera House (Nov 2014)
Got to spend a nice, but cold, Saturday in Oslo before returning home with Lufthansa via Munich. Conclusion: I was lucky to get alerted about this great Air Berlin / Etihad Business Class fare via my TravelMagic team and Drew & Carrie at TravelisFree. It was a nice opportunity to experience both Air Berlin’s and Etihad’s Business Class product and got a great stay in Indonesia on top. More about my Bali trip soon!

Pic: Map with the full itinerary from Brussels to Bali and back