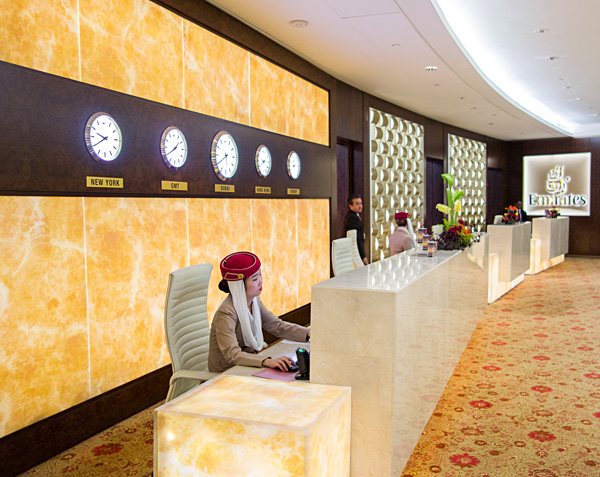 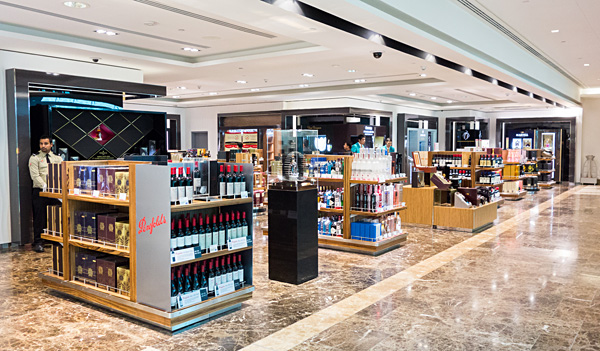 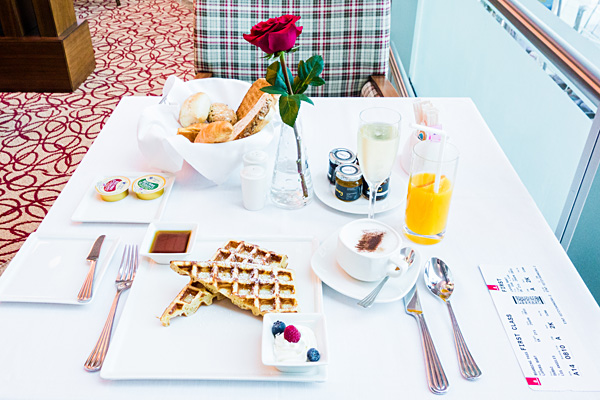 Pic: Emirates Airbus A380 First Class – Suite 2K
Upon boarding I was welcomed by first class flight attendant Joon who escorted me to my seat. A few moments later, in-flight purser Ben introduced himself. I was quite surprised he knew I was a travel blogger. The social media folks at Emirates must have informed him after they noticed my live tweets and instagramming on my AMS-DXB flight. 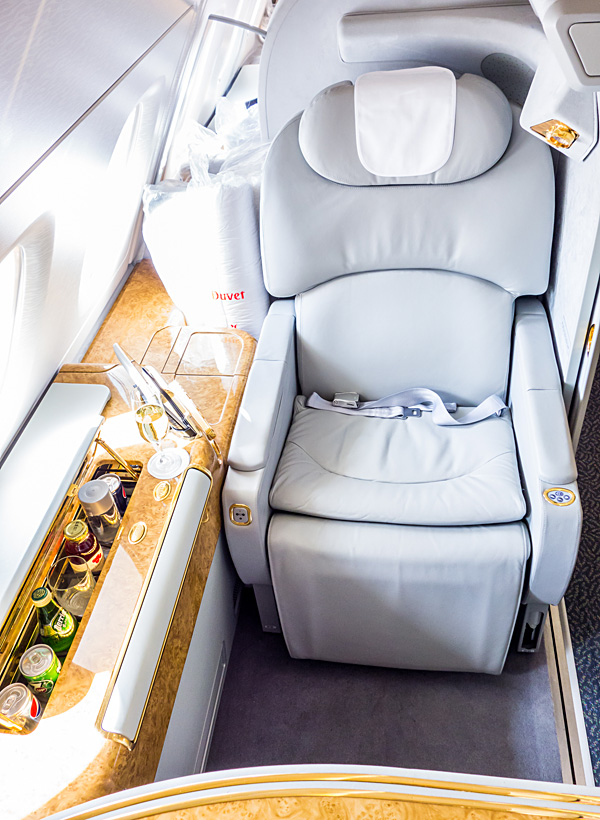 Pic: Emirates A380 First Class – Suite 2K Seat
I was excited to see the A380 featured the ‘new’ First Class suites with 27-inch HD screen and an iPad like In-Flight Entertainment (IFE) & Seat Control tablet. Note: The Emirates ICE system features 1600 (!!) entertainment channels including over 300 movies, hundreds of TV choices and thousands of music tracks. 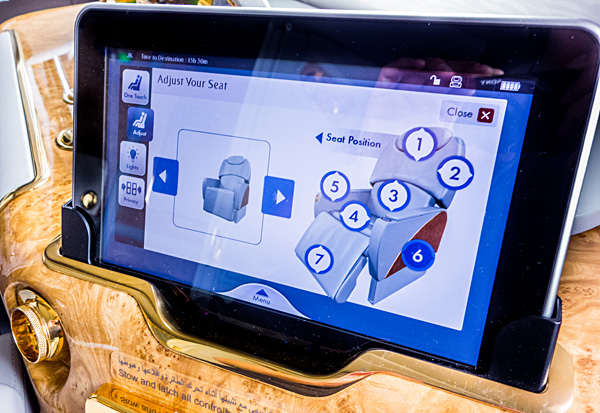 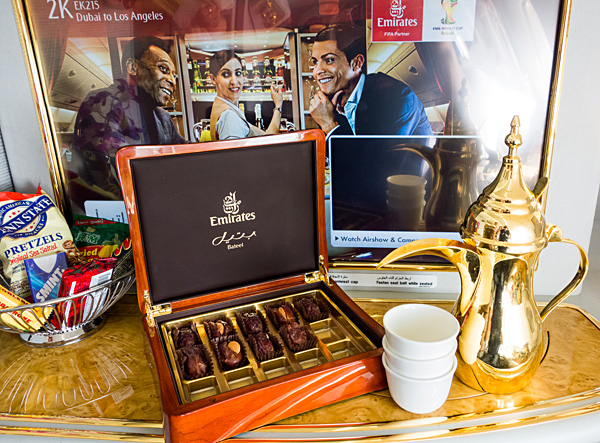 Pic: Emirates First Class – Arabic Coffee and Bateel Dates
As first pre-departure drink and snack, I was offered Arabic coffee and exclusive Bateel Dates. Followed by a  bottle of Dom. 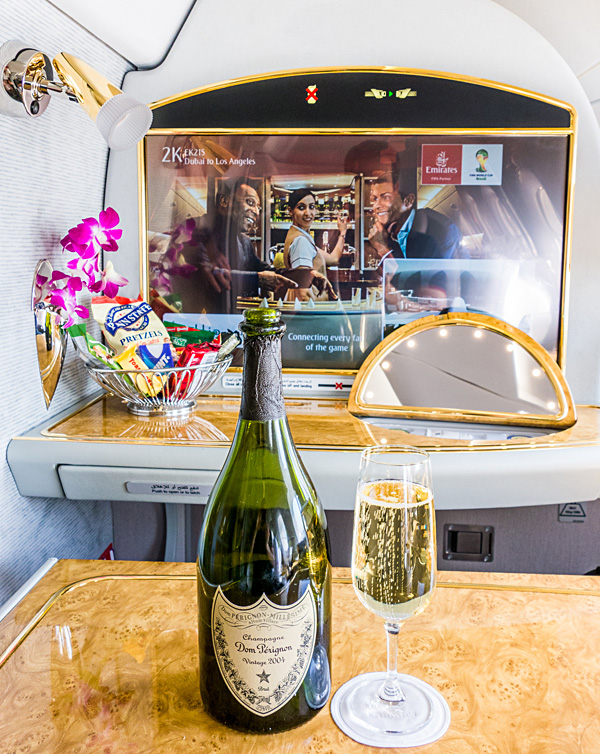 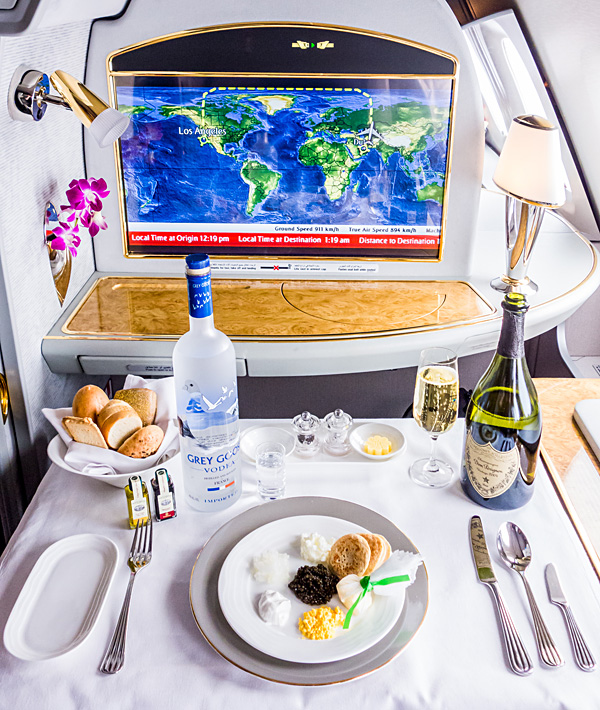 Pic: Chateau Pichon Longueville Baron 2003 Pauillac
I had several meals during my 16 hour flight, here are some of the highlights: 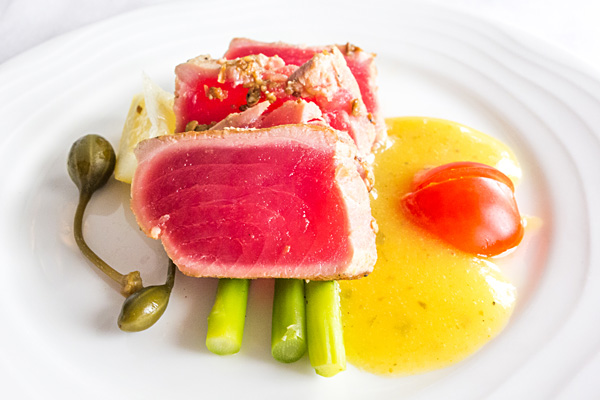 Pic: Emirates First Class – Hennessy Paradis Cognac
Emirates is the only airline in the world serving this extremely rare cognac crafted from several hundred eaux-de-vie aged from 25 to 130 years old. Hennessy Paradis retails at ~€550 ($750) per bottle.

Pic: Emirates A380 First Class Suite with full flat bed
My culinary highlights were followed by a few hours of rest in the privacy of my suite with closed doors. 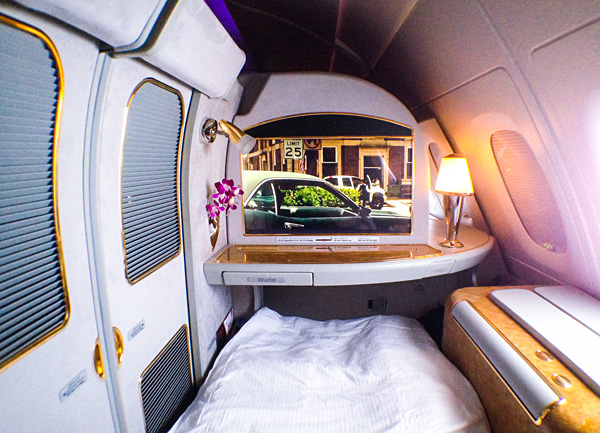 Pic: Emirates A380 First Class Suite with closed doors
Before my arrival in LAX, I refreshed with a fantastic inflight shower Spa session (check my previous Emirates First Class trip report for pictures). Traveling for 16 hours in economy class must be quite a challenge, but when in Emirates First, you wish the flight would be even longer! I hope to have the opportunity to fly more with Emirates in the near future, preferably in First. 😉
PS: A special thank you goes out to purser Ben, flights attendants Kinga & Joon and their colleagues for the excellent service & hospitality.

9 Comments on “Emirates A380 First Class: Dubai to Los Angeles”

Welcome to the “Venice of Africa”, Makoko, the world's biggest floating slum in Lagos, Nigeria 🇳🇬 my 111th UN country. #nigeria #lagos #travelgram #nomadmania
The Great Mosque of Samarra is located in the city of Sāmarrā, Iraq, about 120 km north of Baghdad, on the banks of the Tigris River. It was built in the 9th century and remained the largest mosque in the world for 400 years before being destroyed by the armies of the Mongolian ruler Hulagou Khan during the invasion of Iraq in 1278. The outer walls and the imposing 52-metre high minaret is all that remains of this Great Mosque. #Samarra #Iraq #travelgram #travelawesome #nomadmania
Al-Shaheed Monument (نصب الشهيد‎) also known as the Martyr's Memorial in Baghdad, Iraq 🇮🇶 My 110th UN country!
First trip of 2021: Santorini 💙 The most impressive church in Karterados, Saint Christodoulos, is distinguished by its large bell tower, its courtyard area and excellent view.
My lockdown hideout in Tenerife. 🏖🍉☀️💦
Palácio da Pena, UNESCO World Heritage Site and one of the Seven Wonders of Portugal. #lisboa🇵🇹
What a fabulous boating weekend in Hvar, Croatia. Normally you need to queue up to two hours to visit sites like the Blue Cave and Green Cave near Hvar, not this summer. Chill. #Hvar #BlueLagoon #GreenCave #BlueCave #travelgram #luxurylife #travelawesome
Staying cool at the Trevi Fountain in Rome. Didn’t have to bring any credit cards for this weekend trip. The ring I’m wearing allows me to pay contactless wherever I go thanks to @kbc_be wearables.
Adventurous hiking in the Dolomites. 🤩
My Tweets