Pic: British Airways Galleries First at Heathrow Terminal 3
For my year end trip to Australia, I used 150K US Airways Dividend Miles which I bought for $1702 (€1288). I managed to buy these miles at 1.1 dollar cents during their fabulous 100% bonus on shared miles promos back in Oct 2013, Dec 2013 and Apr 2014. I paid an additional $370 (€285) in taxes and fees to book Amsterdam (AMS) – London Heathrow (LHR) – Dubai (DXB) – Melbourne (MEL) – Sydney (SYD) roundtrip with the long haul flights in First Class and short haul segments in Business Class. My total airfare was €1573 for a trip which could have been easily €8280 booked as revenue ticket!

Pic: No. 1 Traveller Lounge & Spa at LHR Terminal 3
As a Qantas First Class passenger, I was entitled to a 15 minute Spa treatment (menu) at the No. 1 Traveller Lounge & Spa . Fortunately, my ‘Fix It Massage’ session was a bit longer than the advertised 15 minutes. The therapist was friendly and professional, the treatment room rather small, as is the case with most airport spas. 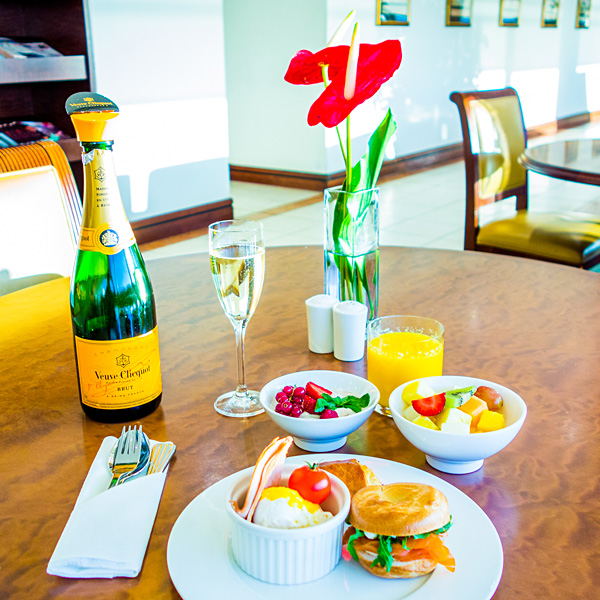 Pic: Breakfast at the Emirates lounge, LHR Terminal 3
For my second breakfast, I visited the Emirates Business and First Class lounge at London Heathrow Terminal 3. The lounge didn’t have a separate area for First Class passengers, which gave it a less exclusive feel. However, the food and beverages buffets were quite extensive.

Pic: Qantas Airbus A380 Kangaroo
Around noon, it was time to board my flight QF10 from London to Melbourne (via Dubai). After reading a number of Qantas A380 First Class seating guides, I had selected seat 4A. The best seat in the house (3A) was already taken. The Qantas A380 First Class cabin is rather crowded with 14 suites, e.g. Lufthansa has 8 seats in First Class, but you can make it a bit more exclusive by selecting a seat in row A. Why? As a passenger in row A, you share the aisle with only 4 other passengers as there’s a divider between row A and F. 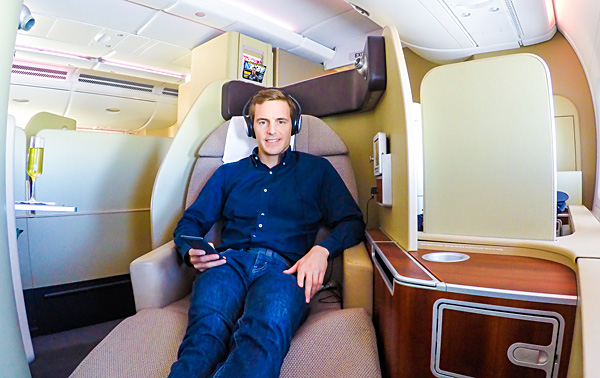 Pic: Bart at A380 Qantas First Class London to Dubai
I didn’t have high expectations of the inflight catering, as Qantas doesn’t have a caviar service, something most other airlines offer in First Class. There were two menu’s for this 7 hour flight: a Tasting Menu and Lunch Menu. I went for the tasting menu of which the main course stood out: the Rockpool Bar and Grill style herb crumbed lamb cutlets with roasted carrots, cauliflower gratin, harissa and seeded mustard. It was one of the best lamb dishes I ever had… so delicious! 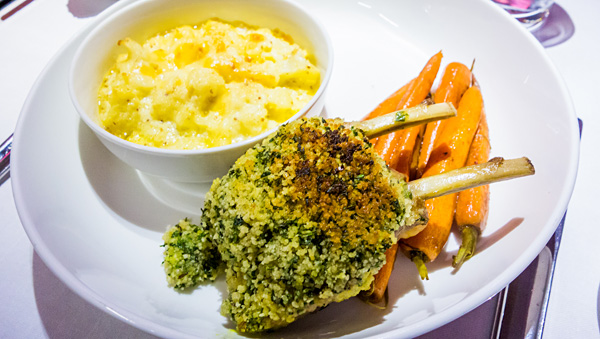 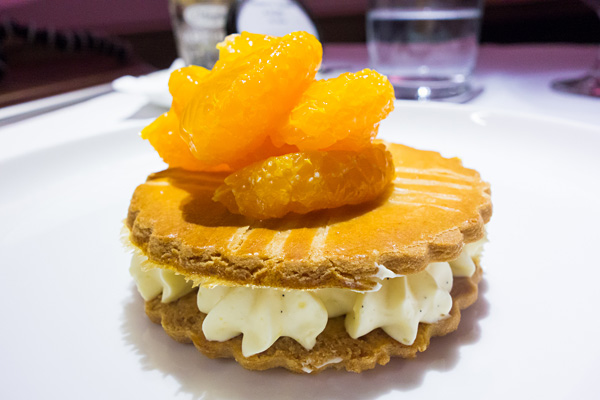 Pic: My Qantas A380 First Class Seat 4A Dubai to Melbourne
After our quick stop in Dubai, we continued the journey to Melbourne which was another 13 hours of flying. I returned to the same seat, but noticed only a few familiar faces. As expected, there was a new crew but also a number of new passengers in First. 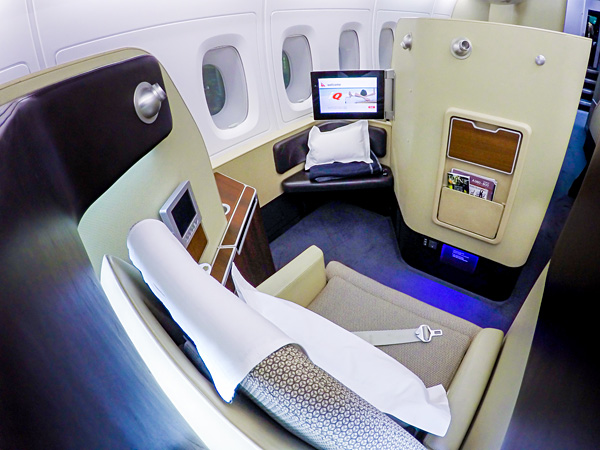 Pic: Cream of pea and mint soup with croutons
As it was well beyond midnight, I only had some light courses from the DXB to MEL menu: Supper and Refreshments, Dinner. The Champagne, Wine and Beverages menus were the same as on the London to Dubai segment. 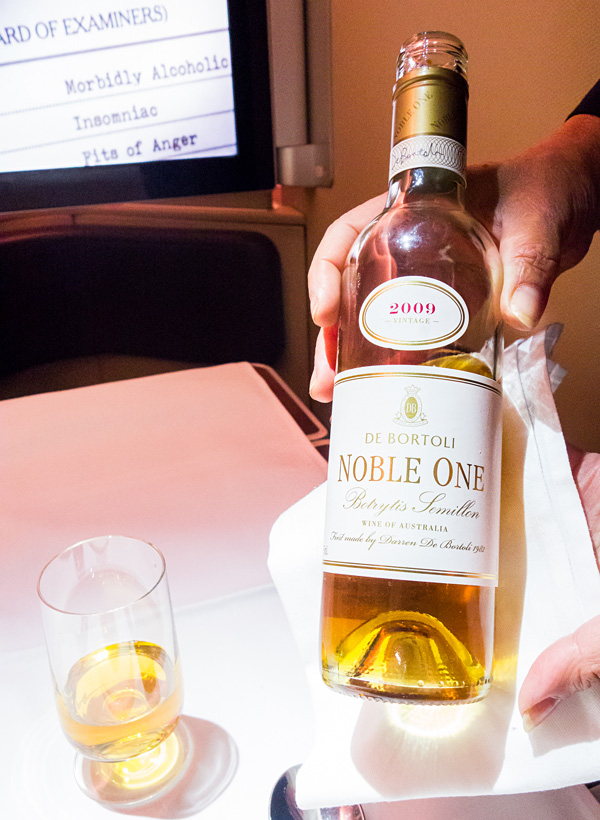 Pic: 2009 De Bortoli Noble One Botrytis Semillon
After my light meal, I had the pleasure to enjoy the heavenly Qantas First Class bed. My new favorite in the sky together with the Lufthansa B747-400 First Class bed! 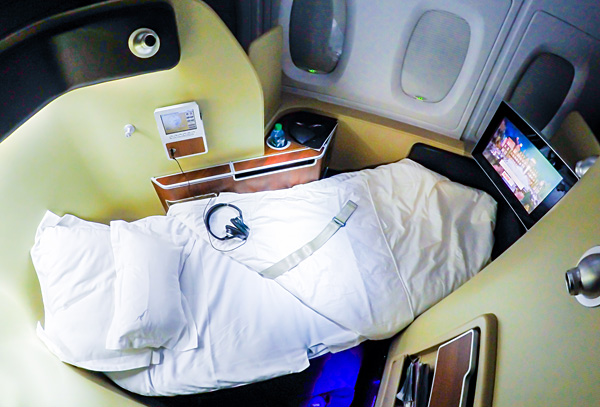 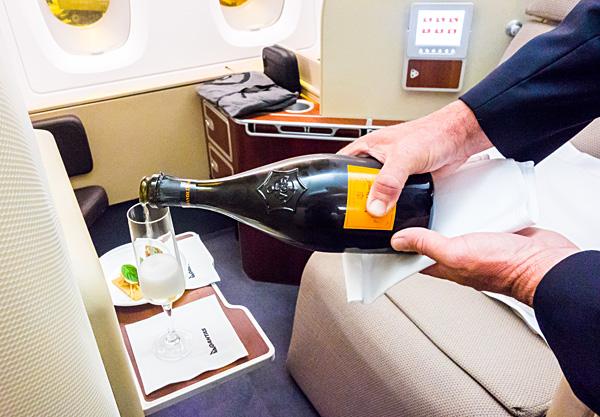 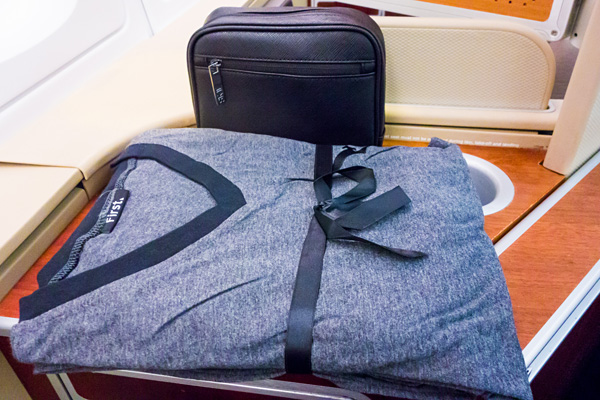 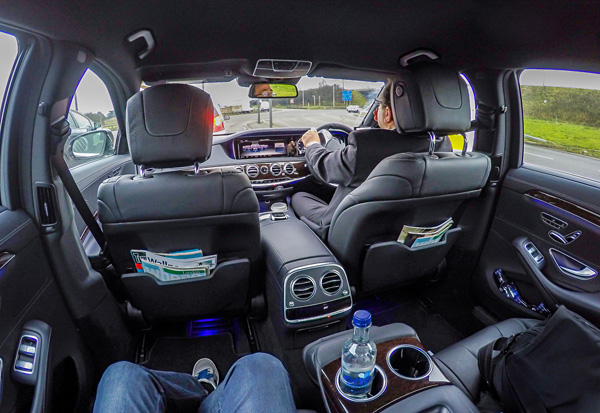 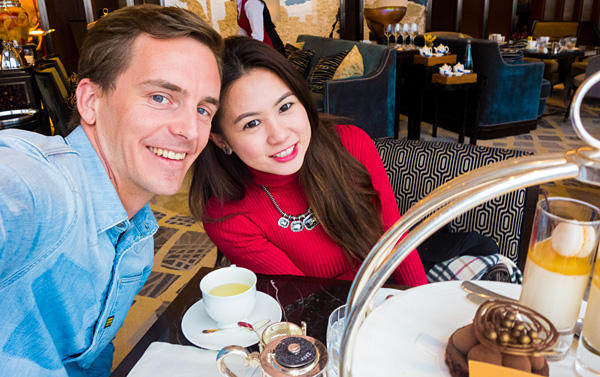 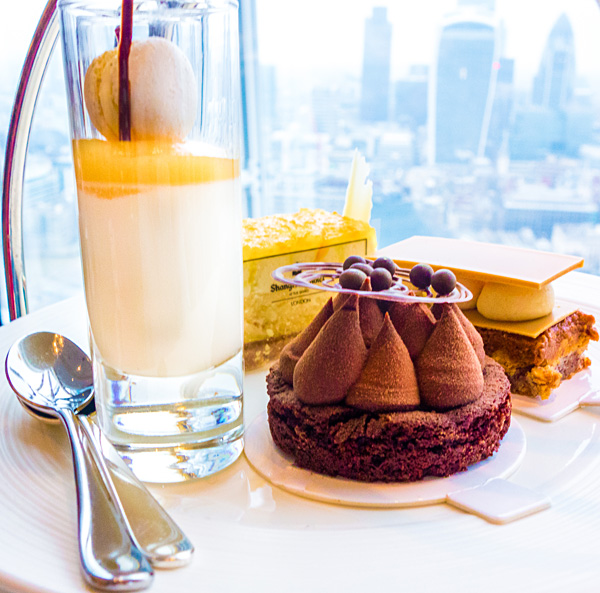 10 Comments on “Qantas A380 First Class: London to Melbourne”