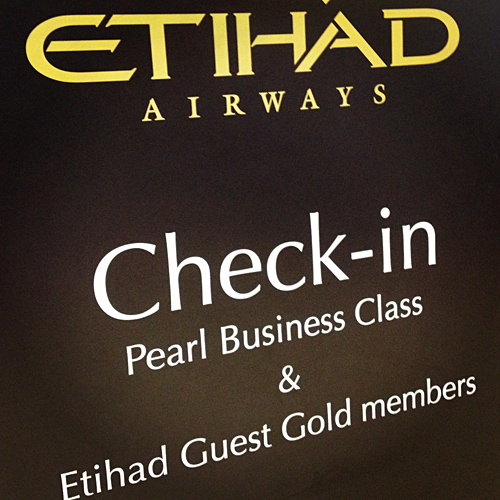 Pic: Etihad Airways Business Class Check-in (May 2012)
Early May, Etihad Airways was running a 96h World Sale which included some great fares.  Some of those fares became even better if you booked them as open-jaw tickets.  And that’s exactly what I did for my recent Thailand trip: Geneva – Abu Dhabi – Bangkok – Abu Dhabi – London Heathrow for 358 Swiss Franc or €307!  Of course I still had to get from Brussels to Geneva and from London to Brussels.  Flew Easyjet from BRU to GVA for €62 (incl. luggage fee) and took the Eurostar from London to Brussels for free using a compensation ticket.  €362 for a return trip Brussels – Bangkok is a great deal, right?  Yes, it was, but keep in mind the additional expenses and time lost making ‘detours’.  Even though my outbound GVA-AUH flight was only on Wednesday night, I had booked the Easyjet morning flight from Brussels to Geneva.  I wanted to avoid missing the Etihad flight, which meant I had a 9h layover at GVA airport.  No problem I thought, I will store my luggage at the airport and visit Geneva or work on my laptop during the day.  This turned out to be an expensive scenario, as the weather wasn’t too good in Geneva, I decided to stay at the airport.  I spent almost €80 on food, drinks and wifi during that layover.  Geneva is awfully expensive (fifth most expensive city in the World): 24h wifi €21, Pizza with one beer €22, Starbucks Frappuccino €8.  Getting comfortably from LHR airport to St Pancras International station wasn’t cheap either: Heathrow Express train €24, London Underground ticket €5,50.  All this additional info to remind you to think twice and to make your calculations before booking open-jaw tickets.  Still, I felt I got excellent value out of this trip, primarily because I managed to upgrade on leg of the trip to the fantastic Etihad Pearl Business Class.

Pic: Etihad Upgrade Offer to Pearl Business Class (May 2012)
No, I didn’t get the upgrade for free this time.  Two days after I made my booking on Etihad.com, I received an email indicating some legs of my BKK trip were eligible for an upgrade from Coral Economy Class to Pearl Business Class.   Etihad recently introduced Plusgrade, a system which allows you to bid for upgrades.  Initially I wasn’t too impressed, as there was a minimum bid.  If I would have bid the minimum for the three eligible legs, the total surplus would have been around  €1200, a lot of money.  I didn’t bother and declined the offer.  But once in Bangkok, I looked-up the email again and placed the minimum bid on the BKK-AUH flight.  Why?  My outbound trip with EY (Airline code for Etihad Airlines) to BKK (IATA code for Bangkok Suvarnabhumi Airport) in Y (booking code for Economy Class) had been phenomenal.  Without doubt the best economy class I ever flew.  I really wished European and American airlines would have the same standards, just incredible.  From the service, to the IFE system (In-flight Entertainment) to the food, just wonderful!  So how much did I bid to upgrade to Pearl Business Class on EY403 BKK-AUH? CHF360 or €304 and it was accepted!

Pic: Premium Lane Pass for Security and Immigrations at Bangkok Airport
Note: My apologies for the low quality of the pictures in this post.  All were made with my iPhone 4S as I was a bit reluctant to get my large DSLR camera out due to the fact several Business Class passengers were Arab women dressed in Burqa‘s.

Pic: Thai Royal Silk Lounge Concourse E, Bangkok Airport (May 2012)
The upgrade bid turned out to be a great move.  After check-in at the BKK Business Class/Etihad Guest Gold members desk, I was provided with a Premium Lane pass for immigrations and airport security.  After these formalities, I headed to the Thai Royal Silk Lounge at Concourse E.  I was a bit surprised Etihad didn’t have their own lounge at such a big airport.  The Royal Silk Lounge wasn’t too impressive and overcrowded.  The real business class treatment only started after boarding the Etihad Boeing 777-300ER.  I was assigned seat 9H. 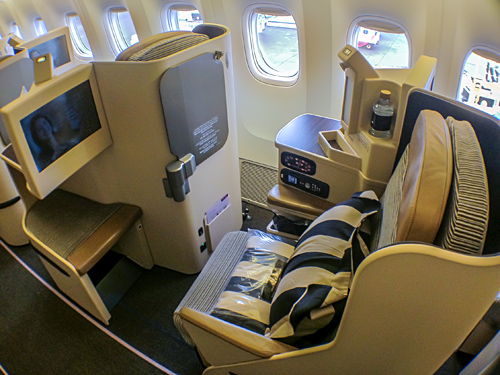 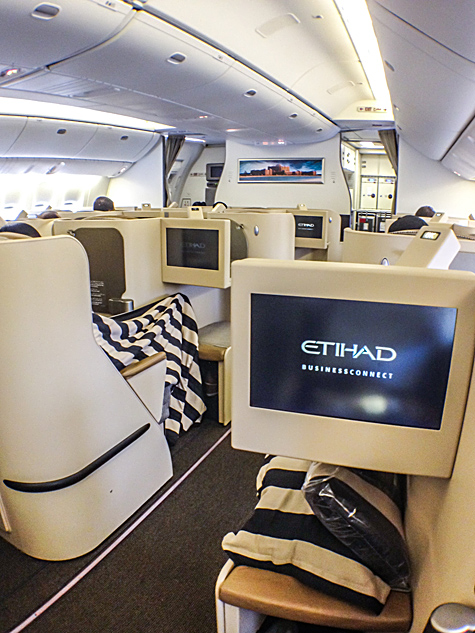 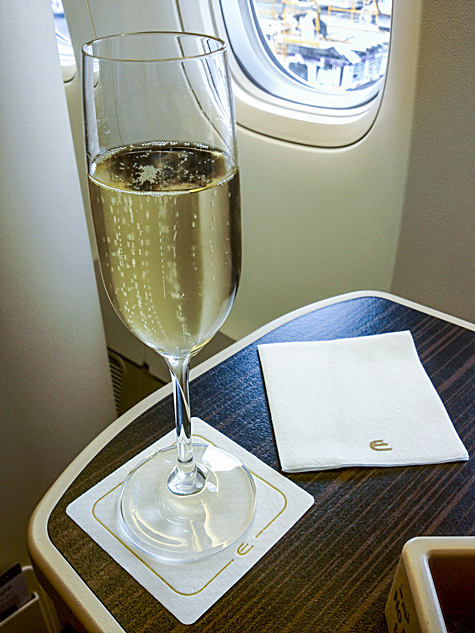 Pic: Glass of Champagne Drappier Brut Blanc de Blancs before departure
After being welcomed by name by the Chief Purser, I was offered a glass of Drappier Champagne.  I love the fact Etihad uses real long champagne glasses.  I hate the ‘shorties’ used by Lufthansa & co in their Business Class.  With LH you need to fly in F before you get a real Champagne glass. 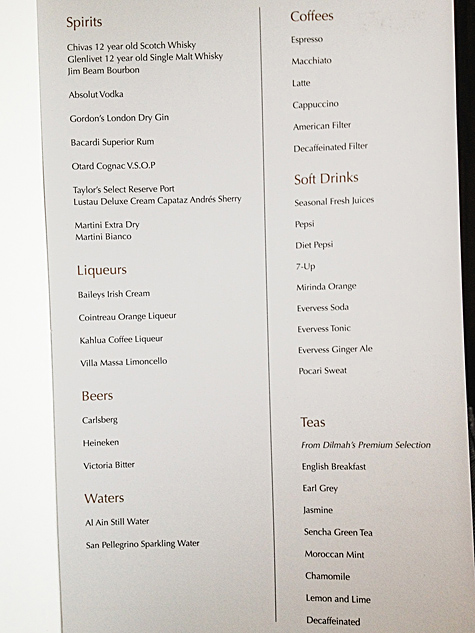 Pic: Etihad Pearl Business Class – Drinks menu (May 2012)
After take-off the menu’s and amenities were handed out.  The amenities were not distributed in a kit but rather individually.  As this was an early morning flight, I went for a full breakfast.  What I liked about the meal service, was the ‘A la Carte’ formula.  No trolly in the isle with the different food options, instead the Chief Purser took everyone’s individual order.  The food was prepared in the ‘ kitchen’ and served like in a real restaurant at your table.  I experienced this individual approach as a real plus.  The feeling I had during the meal service in Etihad Pearl Business Class was similar to Lufthansa First Class.  Just to give you an idea how precise and detailed the Etihad C class is.

Pic: Etihad Pearl Business Class – Cheese Platter & Steak Sandwich (May 2012)
Around noon, I ordered the Cheese Platter and Steak Sandwich from ‘Kitchen anytime’ menu.  Served with a smile and oh so delicious, best business class food I ever had!  Conclusion:  This 6 hour Etihad flight was too short, I wished it had been a 12h flight, so much I enjoyed it.  That’s why I tweeted upon arrival in Abu Dhabi: My Etihad B777-300 Pearl Business Class experience: Nothing Short of Fabulous!