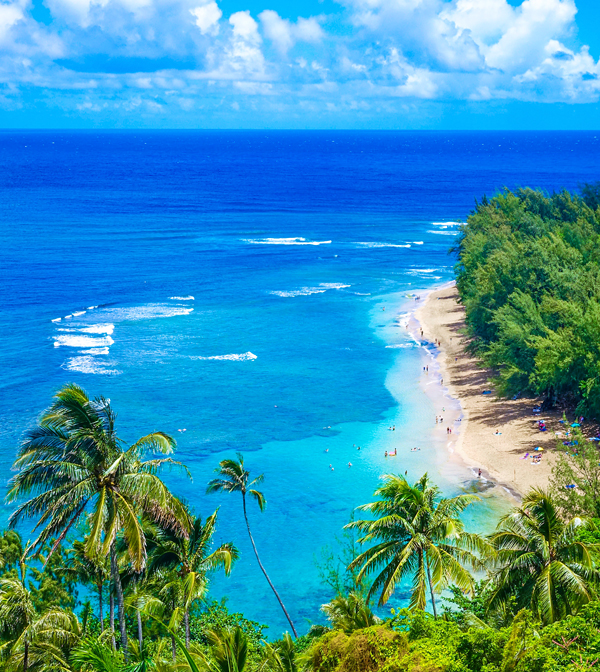 Back in May, I visited the Hawaiian island of Kauai for the first time. Being so overwhelmed by it’s beauty, I couldn’t resist visiting Kauai again this month. Result: a summary of my experiences and advice for your future trip to the Garden Island below!

Which Hawaiian island should I visit?

Pic: New SWISS B777-300 Business Class from Zurich to Los Angeles
Flying from Europe to Hawaii is quite a trip with 8500 miles to be covered and a 12 hour time difference. Economy class tickets can easily set you back €1000 or more if you don’t hunt for a bargain. If you were lucky, you noticed my tweet or facebook update a few weeks ago when tickets were selling as low as €405 for a round trip from Brussels to Honolulu (HNL, Oahu) Lihue (LIH, Kauai) Kahului (OGG, Maui) or Kona (KOA, Big Island). Missed that amazing deal? No worries, here are some tips to score a good deal: 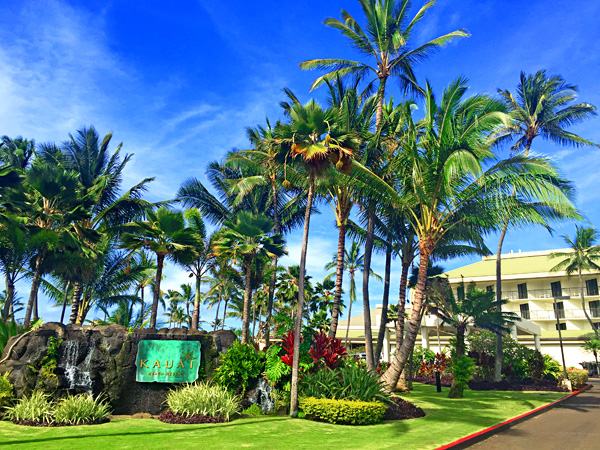 Pic: Aqua Kauai Beach Resort (May 2016)
Kauai has a limited number of chain hotels which are generally not worth the high rates (and resort fees) they charge. Don’t even think about redeeming your points, keep them for non-US destinations! My advice is to use Airbnb. For my stay in May, I managed to get a room at Aqua Kauai Beach Resort for half the price the hotel charged on their website. A similar deal at Islander on the Beach for my stay in August. The trick is to book privately owned units at the resorts via Airbnb. Hula Now is one of the agencies listing these units on Airbnb. In most cases you can also avoid paying the high resort fee! If you haven’t used Airbnb before, this is the right time to sign-up, even if you don’t intent to make a booking right now. Airbnb currently offers €30 or $30 free credits which can be use as discount on your first Airbnb booking.
END_OF_DOCUMENT_TOKEN_TO_BE_REPLACED 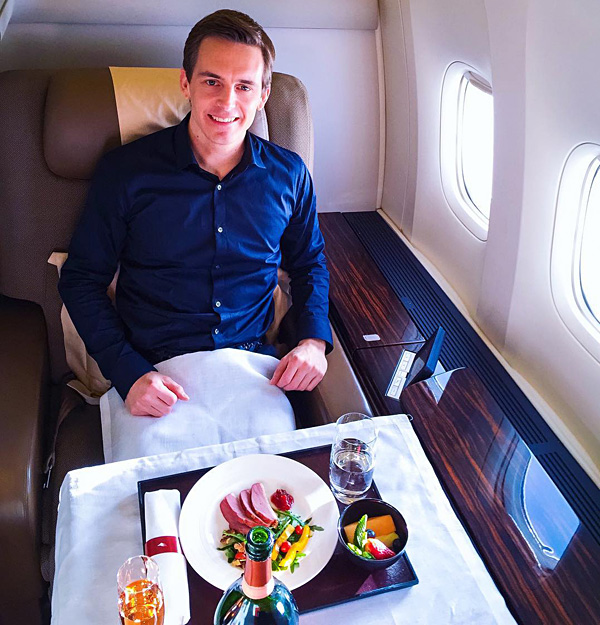 This post is published in Dutch to highlight a contest where Belgian readers can win 10 Round The World trips of 12500EUR! 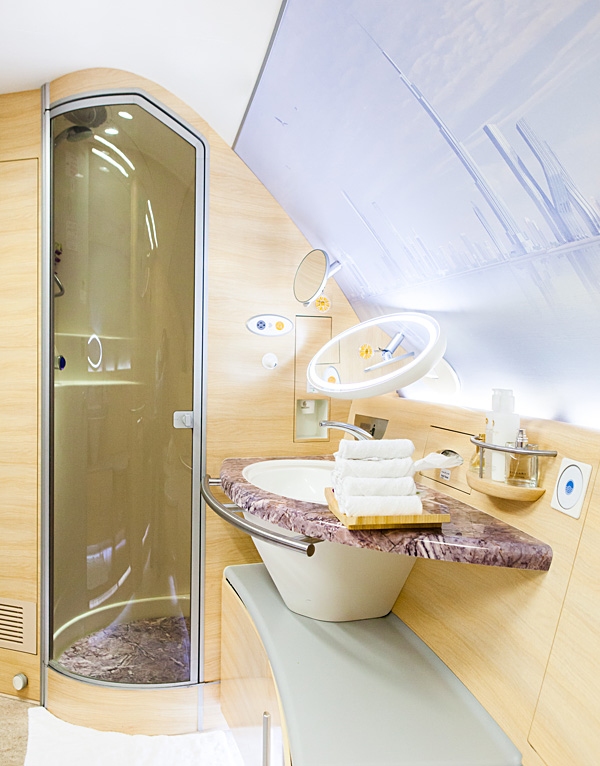 END_OF_DOCUMENT_TOKEN_TO_BE_REPLACED

I travel too much! 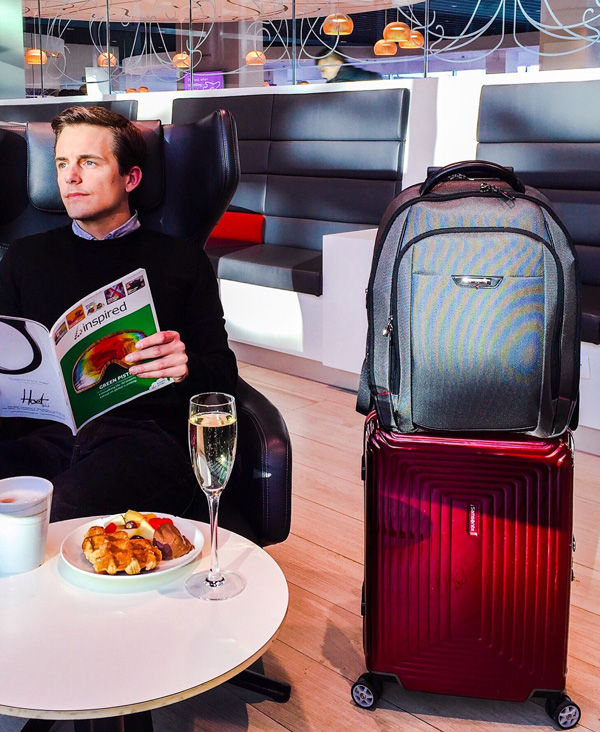 I travel too much… at least to keep this blog up-to-date! 😉 In first 5 months of this year, I visited 20 destinations in 12 countries. Some stats:

Pic: Driving the all-new BMW 7 Series
In January, Belgian television magazine ‘Telefacts‘ made a documentary about my luxurious travel lifestyle. BMW provided me the all-new 7 series for our drive from Brussels to Paris Charles de Gaulle airport. You don’t get to drive a ~150.000EUR car every day!

Pic: The new SWISS Boeing B777-300ER
On February 8th, I had the pleasure to fly the new SWISS B777-300ER on the first day of commercial operations. I also spent a few hours in the new SWISS Senator lounge at Zurich Airport Terminal E. 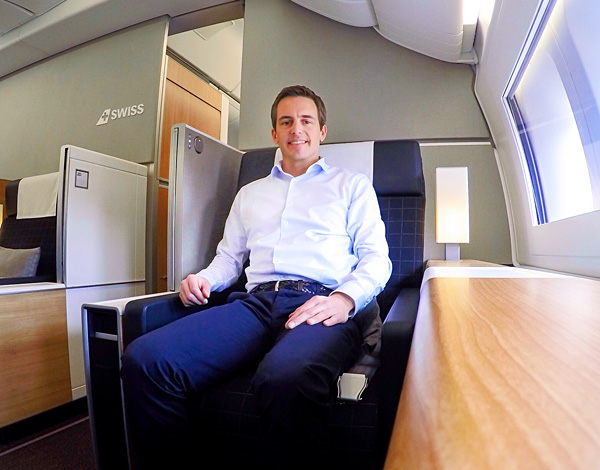 Pic: Awesome runway view before take off in Zurich 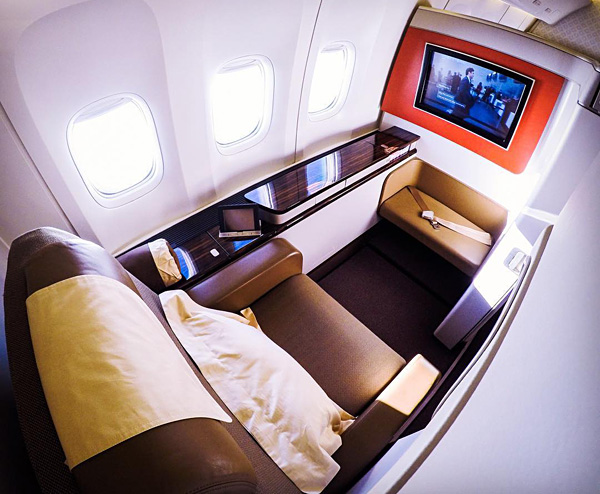 Pic: Garuda Indonesia B777-300ER First Class Seat 2A
Mid February, I enjoyed one of the last Garuda Indonesia 5th freedom flights between Amsterdam and London Gatwick. With just 45-minutes up in the air, it was Europe’s shortest First Class flight. The best short haul I have ever flown!

Pic: All Nippon Airways B787 Dreamliner Business Class
In March, I flew non-stop between Brussels Airport and Tokyo Narita Airport with All Nippon Airways (ANA) on the B787 Dreamliner in Business Class. I used IHG Rewards Club points to stay at The Strings By InterContinental Tokyo (video) and InterContinental Tokyo Bay (video). I also visited Osaka and Kyoto where I stayed at the Hyatt Regency Kyoto using a combination of Hyatt Gold Passport Points + Cash and the Hyatt Best Rate Guarantee.

Pic: The Great Sphinx of Giza in Cairo, Egypt
End of March, I visited Cairo for the first time. Highlights were the Pyramids of Giza and Tutankhamun’s mask at the Egyptian Museum. Hotel wise, Cairo offers excellent opportunities to burn Hilton HHonors points. I stayed two nights in a Junior Suite at Hilton Ramses for just 10,000 points per night. 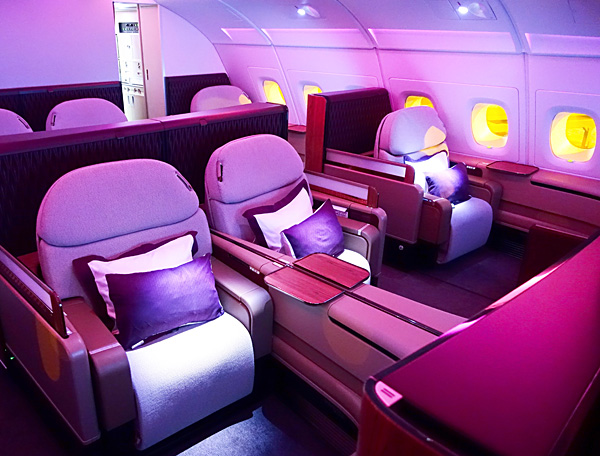 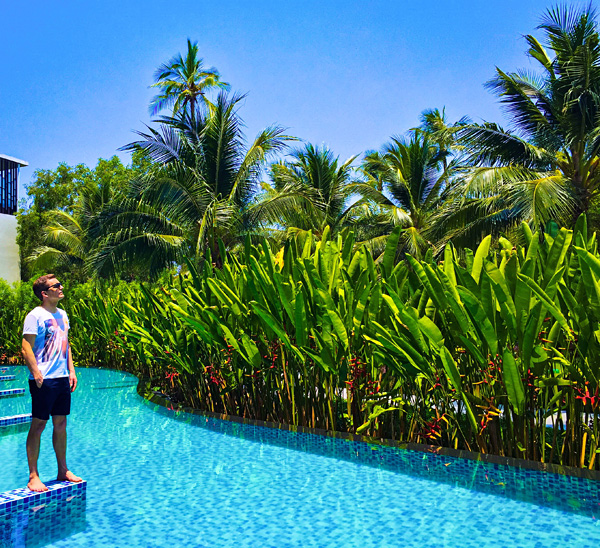 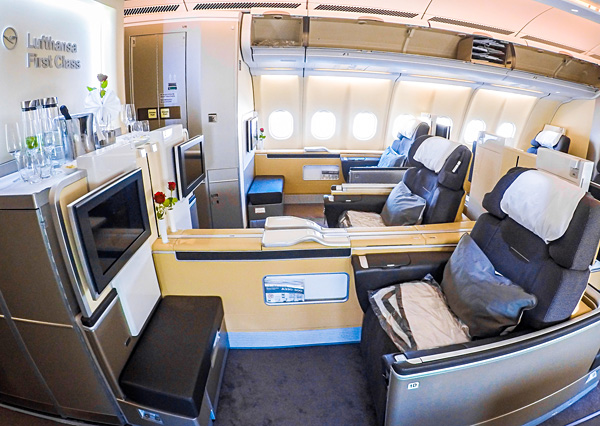 Pic: Laurent-Perrier Grand Siècle – ‎Lufthansa First Class
For my return home, I redeemed 62000 Lufthansa Miles & More miles + 217EUR in taxes & fees to book Dubai – Munich in First Class on the A330-300. The required miles were earned with my Brussels Airlines American Express card.

Pic: Magical landscapes of Iran seen from my Lufthansa flight 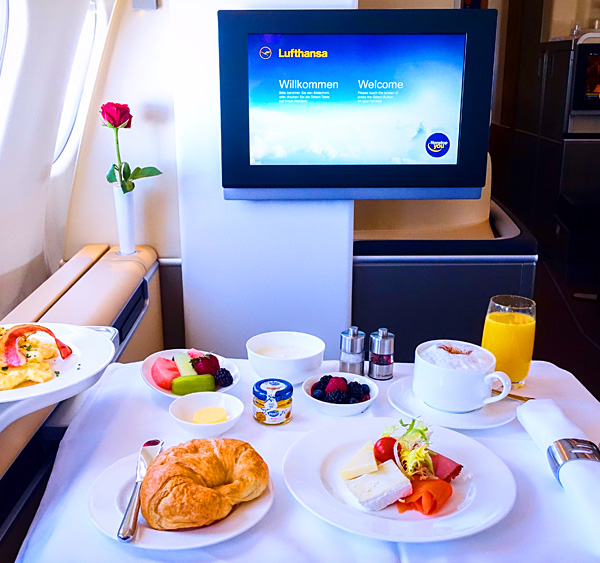 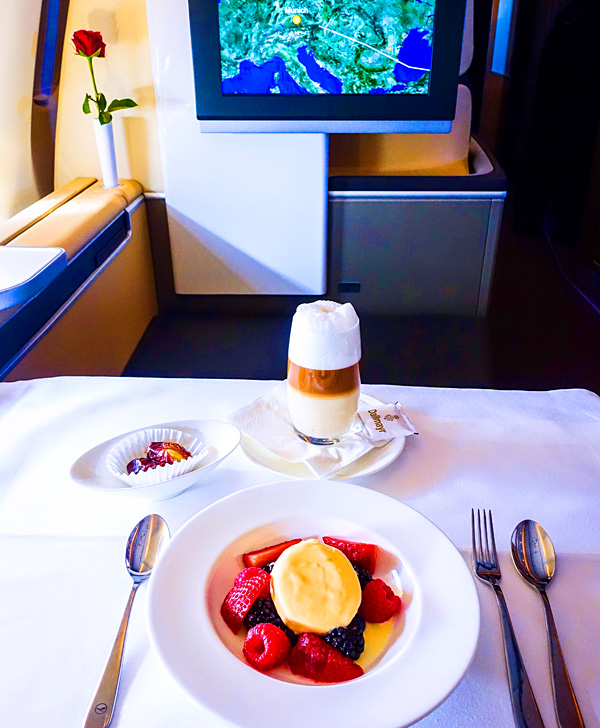 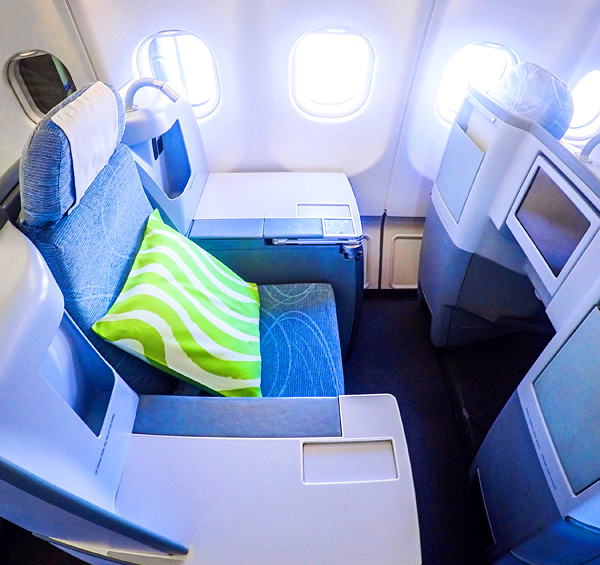 Pic: Breakfast onboard Finnair A320 Business Class Oslo to Helsinki

Pic: Amazing views of Greenland from my Finnair flight
In May, I flew twice to the West Coast using a Oneworld Business Class error fare from Oslo. The first trip was a long weekend in Seattle where I stayed one night at Crowne Plaza Seattle Airport using 25,000 points and two nights at Holiday Inn Express & Suites Everett for just 5000 points per night! (IHG Rewards Club PointBreaks) With the Boeing Everett Factory only minutes away, a perfect location to visit the largest building in the World by volume! There was also room for nature, a beautiful day at Mountain Rainier National Park. 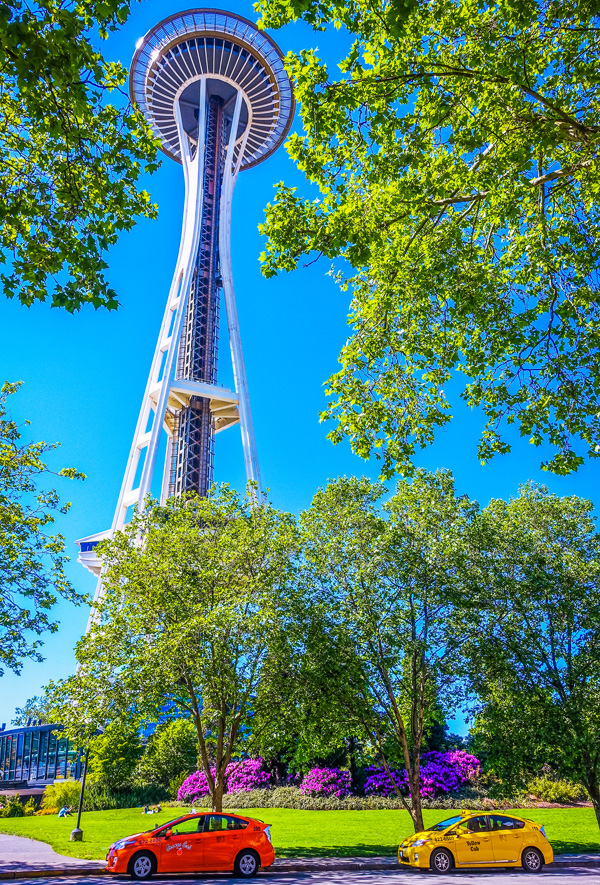 Pic: British Airways A380 Business Class seat 53K
One week after my Seattle trip, I visited the US again. This time I was flying to San Francisco with one of my least favorite European airlines, British Airways. Their Club World Business Class is a joke, I still don’t get it how people can pay > 2000EUR for such inferior experience. I’ve now flown Club World on the B777-200, B747-400 and A380-800 and all I can say is, if you really need to fly BA Club World, make sure to fly it on the A380 and go for seat 53K. One of the rare seats with ‘private’ aisle access. 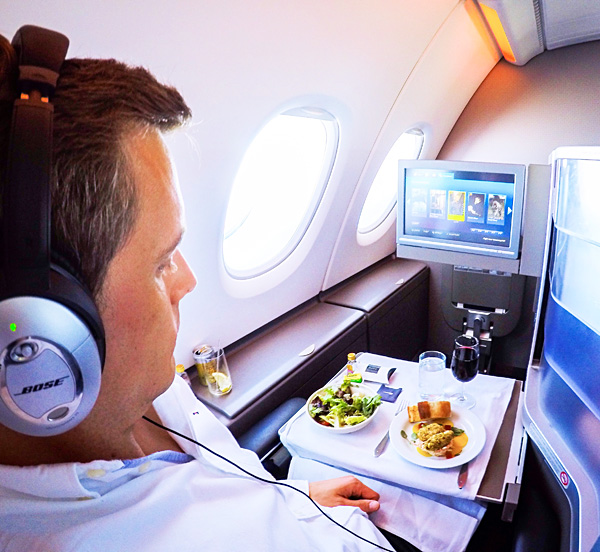 Pic: Blue Hawaiian helicopters on Kauai, Hawaii
From San Francisco, I continued to the Hawaiian island of Kauai. As there are six Hawaiian islands to choose from, I found this infographic helpful to decide which island to visit. Kauai was an excellent choice with the Na Pali Coast as absolute highlight. I booked two helicopter flights over the garden island, a luxurious comfortable ride with Blue Hawaiian Helicopters and a more adventurous doors-off flight with Jack Harter Helicopters. Amazing!

Pic: The mind blowing Na Pali Coast on Kauai, Hawaii
Conclusion: I’ve travelled a lot in the past 5 months, in fact, my travel pace has never been higher. If you don’t want to wait until my next blog post, make sure to follow me on Snapchat, Instagram, Facebook and Twitter. 😉 Thank you for your likes and support!

Mid-February, Visit Svalbard invited me to discover the Norwegian archipelago Svalbard in the Arctic Ocean. Svalbard is the northernmost settlement in the world with a permanent civilian population. Longyearbyen, the largest settlement (2100 inhabitants) on the island of Spitsbergen is located 1338 km (831 mi) from the North Pole and 2313 km (1437 mi) from Oslo. Since Svalbard is located north of the Arctic Circle it experiences polar night in winter. In Longyearbyen, polar night lasts from October 26 to February 15. During my visit, February 18-22, it wasn’t possible yet to see the sun as it was blocked by the mountainous terrain. It takes until March 8th before the sun reappears in the sky, an event which is celebrated by the locals during Sun Fest Week in Longyearbyen.

END_OF_DOCUMENT_TOKEN_TO_BE_REPLACED

Use aggregators to check airfares on many OTA sites (Online Travel Agencies) simultaneously. My favorites: