End of April, I flew Emirates First Class from Amsterdam to Los Angeles via Dubai on the A380. The revenue price of my ticket would have been €14988 ($20432), but thanks to Alaska Mileage Plan, I was able to book it for €1644 ($2241) using 100,000 miles. It was Ben Schlappig (OneMileataTime) who taught us at TravelMagic 2013 how to buy Alaska Miles on the cheap and use them to book Emirates First Class.

Pic: Emirates First Class Chauffeur Drive Service
Emirates Business and First Class bookings include complimentary Chauffeur Drive service. I had the pleasure to enjoy a ride in a brand new Mercedes-Benz S-Class from my hotel in downtown Amsterdam to Schiphol airport. A great start of my Emirates First Class journey! At check-in, I was offered the choice between lounge access or a €45 Food & Beverage voucher which could be used at any restaurant at the airport. I chose the latter, as Emirates doesn’t have a dedicated lounge at AMS and their partner lounge at Schiphol is known for its poor quality. As I wasn’t hungry, I used the voucher to pay the meals of a random family at a pizza place. You should have seen the looks on their faces, they were convinced it was a scam. 🙂 Instead of having a meal, I relaxed with a nice Spa treatment at XpresSpa. 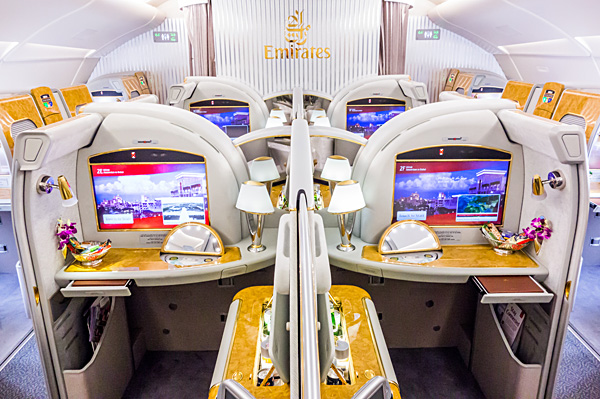 Pic: Emirates Airbus A380 First Class Cabin
Upon boarding, I was welcomed by one of the First Class flight attendants who escorted me to suite 3A. The Emirates First Class cabin is at the front of the A380 upper deck with 14 suites in a 1x2x1 configuration (seat map). The suites are slightly staggered to avoid looking directly into somebody’s else’s suite. Suites 1A and 1K have less space around them due to the proximity of the First Class bar and Shower Spas. Similar case for suites 4A and 4K due to the proximity of the lavatory and galley.

Pic: Bart flying Emirates A380 First Class from Amsterdam to Dubai
With only 4 out of 14 suites occupied, flight EK148 had a light load in First. Flight attendant Gretta used the opportunity to snap some pictures of me. 🙂 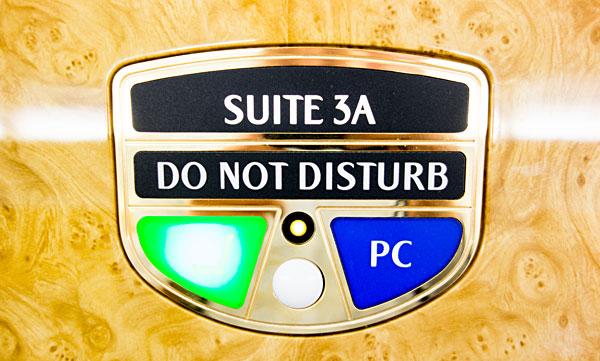 Pic: Emirates First Class Suite 3A – ‘Do Not Disturb’ 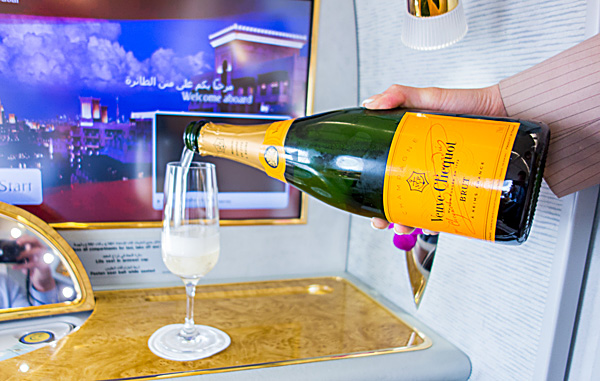 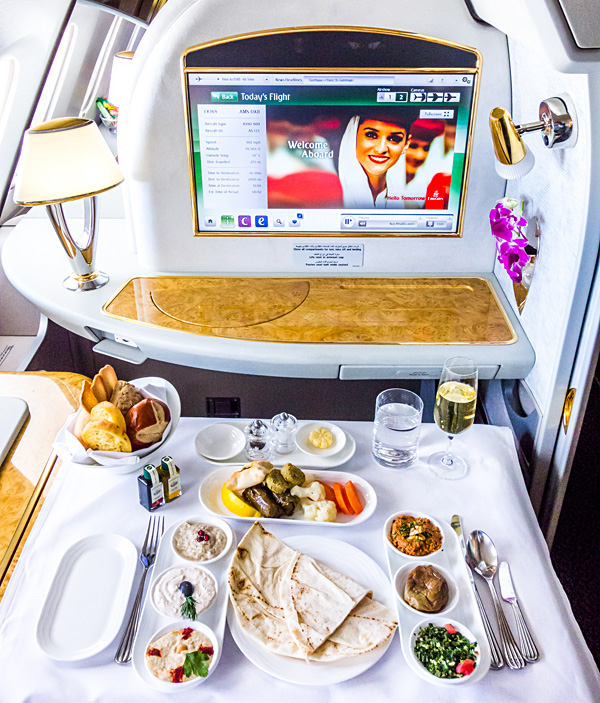 Pic: Emirates A380 Onboard Business Class Lounge
After lunch, I visited the Business Class bar located at the back of the A380 upper deck. Unfortunately, I didn’t meet Cristiano Ronaldo nor Pelé! 😉 I did have an interesting conversation with a Dutch business man traveling on Emirates on monthly bases. He confirmed the superiority of the middle eastern airlines (Emirates, Etihad, Qatar Airways, …) versus the ‘traditional’ European and American airlines. 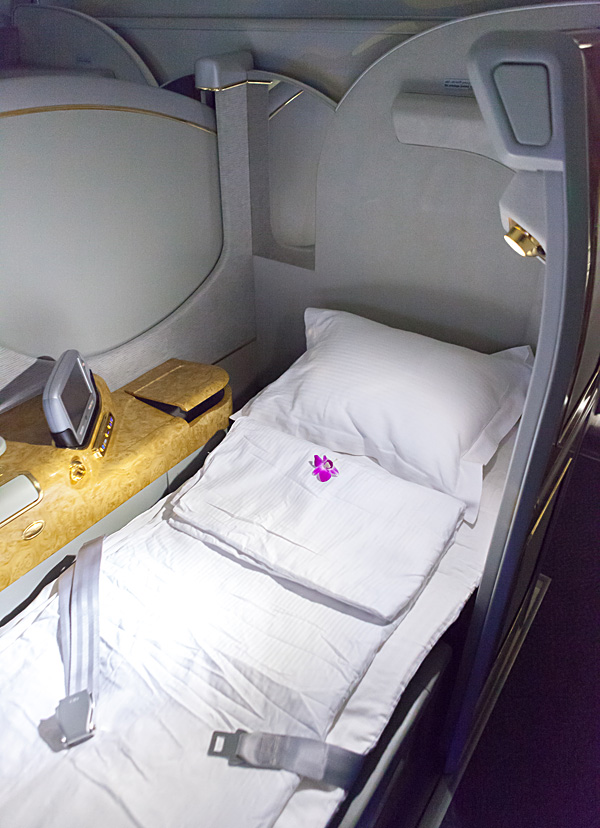 Pic: Emirates First Class – Suite 3E with seat in flatbed mode
After all the eating and drinking, it was time for some rest. I requested the flight attendant to prepare the bed in the Suite next to mine, as the flight had such light First Class load. The bed was really comfortable with an additional mattress put on top of the seat in combination with a duvet.

Pic: Emirates First Class A380 Shower Spa and Restroom
The absolute highlight of my Emirates A380 First Class flight was scheduled at the end: showering at 40,000 feet, what an exhilarating experience!

The Emirates First Class Shower Spa Experience lasts for approximately 20-30 minutes. The system is designed to give you a set shower time (5 minutes) which starts when you turn on the shower. You can maintain and control the water usage at your leisure. There is a time indicator located inside the shower cubicle so that you can check how much time is available. To let you know that the end of your shower time is approaching, the system will automatically pause the water flow with one minute remaining. 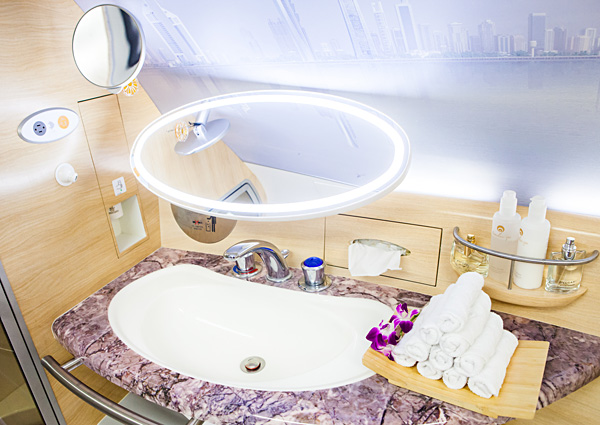 Pic: Signature Shower Spa Tea & Fresh Detox Juices on request
Conclusion: My first Emirates First Class flight was a truly sensational experience. An amazing hard product combined with an excellent & attentive cabin crew makes Emirates First Class one of the best airline products I have ever flown! Next time I fly a competitor’s First Class cabin, my first question will be “Where are the showers?” 😉
PS: A special thank you goes out to the First Class crew of flight EK148 (Apr 27, 2014) for their excellent service.

27 Comments on “Emirates A380 First Class: Amsterdam to Dubai”

My lockdown hideout in Tenerife. 🏖🍉☀️💦
Palácio da Pena, UNESCO World Heritage Site and one of the Seven Wonders of Portugal. #lisboa🇵🇹
What a fabulous boating weekend in Hvar, Croatia. Normally you need to queue up to two hours to visit sites like the Blue Cave and Green Cave near Hvar, not this summer. Chill. #Hvar #BlueLagoon #GreenCave #BlueCave #travelgram #luxurylife #travelawesome
Staying cool at the Trevi Fountain in Rome. Didn’t have to bring any credit cards for this weekend trip. The ring I’m wearing allows me to pay contactless wherever I go thanks to @kbc_be wearables.
Adventurous hiking in the Dolomites. 🤩
Golden hour at magical Santorini island. 🇬🇷 After my weekend trips to Rome and the Amalfi Coast earlier this month, I realised this is a once in a lifetime opportunity to see the European highlights without mass tourism.
Weekend at the wonderful Positano, Amalfi coast, Italy. Now is the time to travel and enjoy the otherwise tourist overrun hot spots of the world. 🌤🌊🍉🏖🍋
This is why I love morning runs... alone at the world famous Trevi Fountain in Rome! Me and my local guide Fabrizio. Support the tourism industry, it will reward you with amazing experiences!
115 days since my last flight, excited to be back at Brussels Airport. Let’s go flying! 🤩 #BrusselsAirport #changeisintheair
My Tweets