It’s that time of the year again, frequent flyers are anxiously looking at the number of status miles they have flown this year, and more importantly, how many they still have to fly to (re)qualify for their elite status.  I’ve been a Miles and More (Lufthansa) Frequent Traveller (Star Alliance Silver) since Oct 2010, which provided me with business class lounge access, 25% more award and status miles, business class check-in and extra free baggage allowance (2 bags, 40KG total)

With 62,242 status miles flown in 2011, I’m still 37758 short for the next Miles and More elite tier, Senator.  This tier comes with Star Alliance Gold status which offers worldwide access to all Star Alliance Gold lounges (incl. the upscale Lufthansa Senator lounges) as long as you have a same-day ticket for any Star Alliance carrier.  You also get two eVouchers which allow you to upgrade two European flights or one long haul flight on a paid ticket.   As Senator you can use the Lufthansa First Class check-in counters even when flying economy.  When flying other Star Alliance airlines, you can use the business class check-in counters.   You can take more free luggage (additional 20 kg): 2 bags in Economy, 3 bags in Business and 4 bags in First class.  Your luggage will be delivered first on the belt on arrival (priority luggage).  When flying economy, you can also board the plane together with the business class passengers.  Finally you can redeem award tickets at 50% of the miles for your companion (Companion Award). 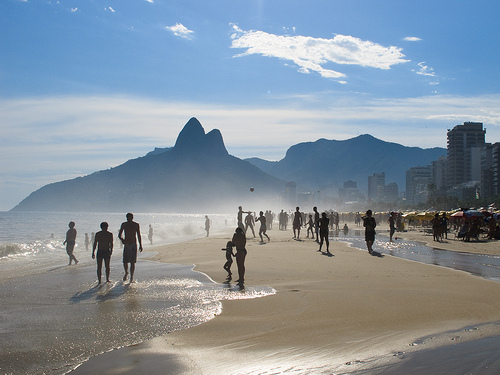 Pic: Ipanema Beach – Rio de Janeiro – Brazil (Feb 2010)
In 2011, the majority of my trips were private, so logically I went for the cheapest fares (i.e. Lufthansa booking classes K and L) which only earn 50% of the flown miles.  I also made some mistakes booking Turkish Airlines tickets which earned me almost no miles (i.e. Istanbul – Brussels: 125 status miles)  and in February my Turkish flight to Kuala Lumpur was canceled and replaced by a Malaysia Airlines flight which earned me zero Star Alliance miles.  Anyway, I had to come-up with a plan to earn an additional 37758 status miles with limited vacation days left for 2011.  I could make 4 long-haul extended weekend trips, but that would have been quite exhausting.  Instead I decided to treat myself to a discounted business class ticket (booking class Z) to a new Lufthansa destination: Rio de Janeiro  I’ve been already twice to Rio (May 2009 and Carnival Feb 2010) so why go again early December?  Who doesn’t want a break from the cold and dark Belgian winter?  Summer in Rio!  Can’t wait to chill at Ipanema beach!  Of course, there’s an other reason I chose Rio, Lufthansa’s double miles promo! 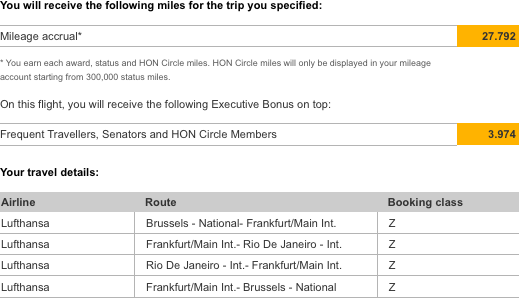 On top of the 31766 status miles, I’ll receive an additional bonus of 27792 award miles.  The promo states it cannot be combined with any other promotion, but if my BRU- FRA myChoice promo (triple miles on business class tickets) kicks in too, it would get me another 8000 award miles on top.  We’ll see how this one turns out.

Pic: Lufthansa A380-800 Johannesburg – My second A380 flight (May 2011)
That leaves me with another 5992 status miles (37758-31766) to earn before year-end 2011.  Why not try another new Lufthansa line?  As of this week (Oct 30, 2011) Lufthansa started flying the A380 from Frankfurt to Singapore.  On Friday Nov 4th, I’ll be one of the lucky economy passengers on the A380 to Singapore.  A return L fare BRU-FRA-SIN for €497.50 which earns me 9892 status miles.  If everything turns out as planned, I’ll have 103900 status miles by mid December, enough to upgrade my status to Lufthansa Senator (Star Alliance Gold) until Feb 2014.  Fingers crossed!
PS: A mileage run is an airline trip designed and taken solely to gain maximum frequent flyer miles, points or status.  The above flights do technically not count as mileage runs as I will actually enjoy several days of vacation at each destination. 🙂