Pic: King Bed Superior room 506 at Hotel Indigo London Tower Hill (Jul 2012)
Last weekend, I attended the Opening of the London 2012 Olympics.  Apart from my amazing experiences at the Olympic venues, I also had a fabulous hotel stay.  Back in August last year, I wrote about the luxury hotels I had booked using PriorityClub points.  A few weeks ago, I changed my mind about the length of my London 2012 stay and shortened it from 9 to 3 nights.  If I would have booked my hotels in Aug 2011 on the best available prepaid rates (which were as high as £450 per night), it would have been impossible to shorten my stay without a penalty.  This is a huge advantage of booking with points: You can cancel your reservations up to the day of arrival (before 6:00 PM local hotel time) without penalty.  Note: Make sure to check the cancellation policy for each points booking you make.  Some properties impose a more strict policy (e.g. the IHG French Polynesia resorts require to cancel a few days in advance to avoid a penalty).  But in general, you can cancel point bookings and have the points returned in your account instantly without any penalty!  Also make sure to have separate reservations for each night you book with PriorityClub points, even if it’s a seven night stay at the same hotel.  This will allow you to cancel certain dates of your stay without cancelling the entire booking.  It might be impossible to make a new reservation using points at the time you want to make changes.  IHG hotels are required to release at least 5% of their room inventory for PriorityClub bookings, but once those are gone, it might be impossible to book on points. Also, canceling a room reservation booked on points doesn’t necessarily mean it’s being added back to the inventory of rooms  bookable on points. 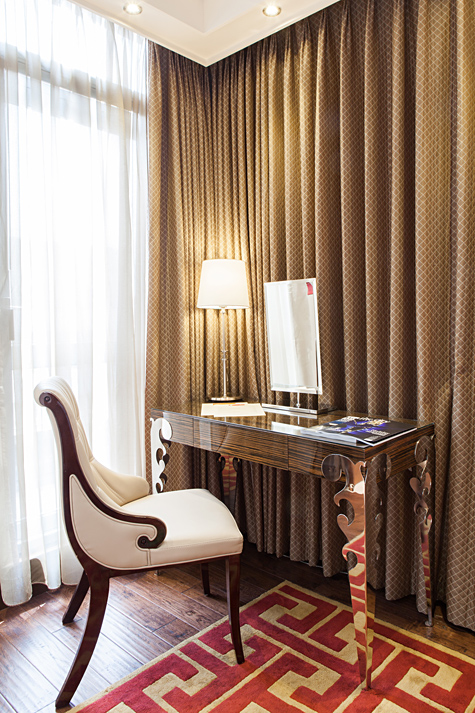 Pic: Work Desk Superior room 506 Hotel Indigo London Tower Hill (Jul 2012)
Finding my way from the Eurostar St. Pancras International station to the hotel was easy, as Aldgate tube station (Circle line) is on walking distance from the hotel (note: Aldgate East station also is nearby).  To my surprise, enthusiastic front desk staff member Tamara spoke fluent Flemish, my first language.  She had been living in Antwerp (Belgium) for 10 years where learned both Dutch and French.  As PriorityClub Platinum member, I was offered a complimentary dessert or glass of wine at the hotels restaurant ‘Square Mile Kitchen & Lounge’.  Internet access was complimentary for all guests, and so was the minibar!

Pic: Olympic Welcome Gift Hotel Indigo London Tower Hill (Jul 2012)
On my first two nights, I didn’t receive an upgrade and was assigned Superior room 506.  It was one of the smallest rooms on the 5th floor (plan), still spacious enough to move around comfortably and it was a corner room.  As I felt ‘home’ at Hotel Indigo London Tower Hill, I decided to cancel my reservation at Radisson Blu Edwardian Mercer Street (booked on Club Carlson points) and to stay a third night at Hotel Indigo Tower Hill.  For my first two nights, I had burned 25K points per night as they were booked back in Aug 2011.  Unfortunately PriorityClub devaluated their points in Jan 2012 by increasing the number of points required for a free night at many of it’s prime properties, including Hotel Indigo Tower Hill (now 35K).  At least those extra 10K points were rewarded with an upgrade to a King Executive room (406) on the 4th floor (plan).  The Executive room was much more spacious than Superior room 506, still it had exactly the same size on the floor plan (4 vs 5).  The bathroom at the Executive room also had nicer walk-in shower and the TV was placed on a drawer instead of being mounted on the wall. 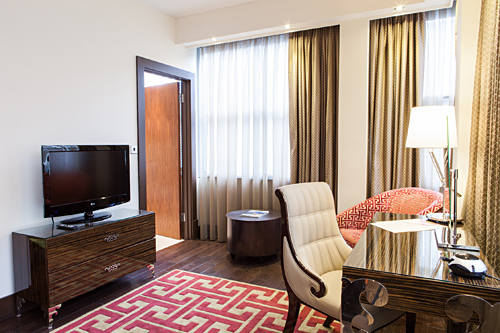