Brussels – London: By plane or train?

For most travelers the cheapest (fastest?) way from anywhere in Belgium to London is by train.  B-Europe.com is the recommend starting point to book your Eurostar (and Thalys, TGV, ICE) tickets for departures from any train station in Belgium.  People living near Antwerp can also rely on Cityjet.com to connect to London for reasonable prices.

As Brussels airport is only a 5 minute drive away from where I live, I prefer to fly.  That’s not the only reason though, travel by air just feels more comfortable and enjoyable to me.  Brussels Airport is a paradise compared to the train stations of Brussels.  Not to speak of the security issues at Brussels South (aka Bruxelles Midi/Brussel-Zuid)  Earlier this month, I had to chase two guys who had stolen my camera bag at this station!

A British Airways newsletter reminded me I still had 6000 miles sitting on my sleeping Executive Club (One World) account.  Now, 6K miles doesn’t buy you much, but a short-haul flight like BRU-LHR could offer opportunities.

Flight awards cover fares only, you still need to pay taxes and fees.  This results in economy class rewards being the lowest value for your hard-earned miles.  The taxes and fees for a return economy class reward flight with British Airways would be a staggering €109.11  The full fare for my return ticket BRU-LHR would be €175.11  That’s a €66 discount in exchange for your 6000 miles, Sir.  No way.  After making all kinds of cash+miles/economy class and business class combinations, I figured out the highest value for my 6K miles.  The inbound flight LHR to BRU in Business class (called ‘Club Europe’ by BA).  The full fare €559.20 euro.  My miles+cash+taxes+fee fare €112.80  That’s a €446,40 value for my 6000 miles!  Of course, business class on a one hour A319 flight won’t be that impressive, but still, I’ll enjoy champagne at take-off and maybe a business class meal.  More importantly, I’ll have the opportunity to experience a business class treatment at the new Terminal 5 of London Heathrow and have access to the British Airways lounges.  A nice topic for a travel.bart.la blog post!

My inbound flight was booked, still had to figure out a way to get to London.  A one way train ticket would be €56, a one way flight €57 (BMI).  Easy choice.  Once again Bravofly.com demonstrated it’s power.  It not only combines regular and low-cost airlines, it also makes combinations of oneway tickets to find the cheapest fare.  Using this kind of ticket search engines, you might noticed intriguing pricing policies.  Example: That €57 one way BMI flight is in fact operated by Brussels Airlines.  Brussels Airlines sells the same flight for €88.  The base fare is €26 for both airlines, but there’s a €31 difference in taxes.  The reason behind this is the difference in fuel surcharges: a €36 fuel fee at Brussels Airlines versus a €5 fuel fee at BMI.  Both airlines have an additional fee for credit card payments: €6 at BMI and €7.5 at Brussels Airlines.  As BMI is a Star Alliance partner, I should be able to collect some miles on this flight too. (we’ll see about that)

Hotels in London are incredibly expensive.  The timing of my trip made it even worst.  UEFA Champions League final 2011 at Wembley stadium on May 28. All luxury hotels fully booked or showing astronomical room rates, also on the days before the final.  Have a look at this HotelsCombined.com screenshot: 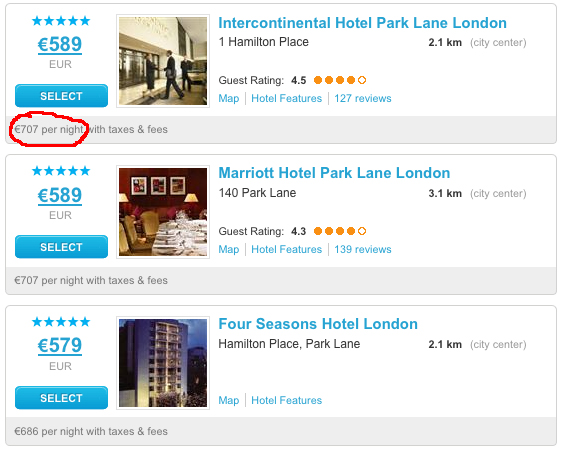 As a budget traveler you would try to avoid planning trips at this time.  As a loyalty traveler it feels like time to cash in a reward.  So I did.  I used two free nights which I earned during last year’s PriorityClub.com Sweet Dilemma promotion to book the InterContinental London Park Lane.

Remark: I had to spend 4 nights (4 stays) at IHG properties to earn those two free nights in 2010.  So I did spend around 250 euro on 4 hotel nights of which two were mattress runs.